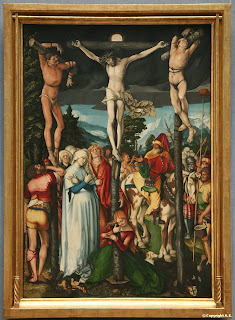 Most Precious Blood of Life Eternal, price of sinful man's redemption, by whose saving streams the thirst of souls is quenched, and their stains are washed away, Thou Who dost plead the cause of man before the throne of infinite mercy, from the depths of my heart I adore Thee and desire, as much as lies in my power, to make atonement for the injuries and insults that are constantly offered Thee by mankind, and especially by those who rashly dare to blaspheme Thee. Who will not bless and praise this Blood of infinite value? Whose soul would not be inspired with love for Jesus Who shed It all for us? What would be my fate, had I not been redeemed by this Divine Blood? And what drew Thee from the veins of my Saviour even to the last drop? It was love! O boundless love, which has given us this saving balm! O priceless balm, welling from the fount of immeasurable love! Grant that all hearts and tongues may praise Thee, magnify Thee, and give Thee thanks, now and throughout all ages. Amen.

And if the cause of Catholic revival is to take on specific meaning for Spaniards and others, why not a rallying cry: "For the Sacred Heart and Saint James!" "Por Corazon Sagreda et Santiago! "

In every Western nation, growing Moslem minorities threaten the peace, and often serve as recruiting grounds for Moslem terrorists. Look at the rail bombing in Spain which drove the solid previous Spanish government from power, and brought in this "surrender-to-the-terrorists-and-subvert-traditional-Spain" socialist government. In the UK, last July's rail and bus bombs were the work of Moslem terrorists. Numerous plots, all involving Moslems, have been thwarted here in the US since September 11th. Even France, so accomodationist to every enemy, was targeted by Moslem extremists, which caused weeks of destructive rioting by Moslem youths in the suburbs of Paris a couple of years ago.
Help us Sacred Heart and Saint James the Moor-Killer!

In every country of the West, the destructive forces of liberalism and socialism threaten the fabric of Christendom. Growing secularization and moral relativism, feminism and egalitarianism are destroying traditional Western culture, and Christendom along with it. Today, the US is poised to re-elect as president an individual who represents this threat in the most stark manner we have ever encountered, out of mere ennui with the necessary war we wage, and some legitimate frustration with high prices for oil-based products. It would be the most feckless and irresponsible abdication of responsibility and leadership that the US has perpretrated on the West since the bug-out from Vietnam, and the worst blow it has inadvertently struck at Christendom ever. And western elites think this is the greatest thing that could happen.

Help us Sacred Heart and Saint James the Moor-Killer!

Those in charge of the reform of the calendar thought they were doing us a favor when they decided that Saint Christopher was legendary, and removed him from the Ordo. But Catholics in the pews, the real John and Mary Catholics, have rejected this "reform" and remain attached to Saint Christopher. His medals are still for sale in just about every Catholic gift shop. And he remains very popular. He was martyred during one of the Roman persecutions of Catholics.