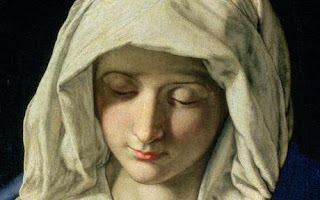 Act of Reparation for the First Saturday of the Month
O Most Holy Virgin, and Our Mother, we listen with grief to the complaints of thine Immaculate Heart surrounded with the thorns placed therein at every moment by the blasphemies and ingratitude of ungrateful humanity. We are moved by the ardent desire to love thee as Our Mother and of promising a true devotion to thine Immaculate Heart.

We therefore kneel before thee to manifest the sorrow we feel for the grievances that people cause thee, and to atone by our prayers and sacrifices for the offenses with which they return thy love. Obtain for them and for us the pardon of so many sins. Hasten the conversion of sinners that they may love Jesus Christ and cease to offend the Lord, already so much offended. Turn thine eyes of mercy toward us, that we may love God with all our heart on earth and enjoy Him forever in Heaven.
Amen.

The Catholic Encylopedia on this heroic martyred priest.

Here is the text of Campion's Brag, his defense of the Faith against the English protestant establishment.

To the Right Honourable, the Lords of Her Majesty's Privy Council:

Whereas I have come out of Germany and Bohemia, being sent by my superiors, and adventured myself into this noble realm, my dear country, for the glory of God and benefit of souls, I thought it like enough that, in this busy, watchful, and suspicious world, I should either sooner or later be intercepted and stopped of my course.

Wherefore, providing for all events, and uncertain what may become of me, when God shall haply deliver my body into durance, I supposed it needful to put this in writing in a readiness, desiring your good lordships to give it your reading, for to know my cause. This doing, I trust I shall ease you of some labour. For that which otherwise you must have sought for by practice of wit, I do now lay into your hands by plain confession. And to the intent that the whole matter may be conceived in order, and so the better both understood and remembered, I make thereof these nine points or articles, directly, truly and resolutely opening my full enterprise and purpose.

i. I confess that I am (albeit unworthy) a priest of the Catholic Church, and through the great mercy of God vowed now these eight years into the religion [religious order] of the Society of Jesus. Hereby I have taken upon me a special kind of warfare under the banner of obedience, and also resigned all my interest or possibility of wealth, honour, pleasure, and other worldly felicity.

ii. At the voice of our General, which is to me a warrant from heaven and oracle of Christ, I took my voyage from Prague to Rome (where our General Father is always resident) and from Rome to England, as I might and would have done joyously into any part of Christendom or Heatheness, had I been thereto assigned.

iii. My charge is, of free cost to preach the Gospel, to minister the Sacraments, to instruct the simple, to reform sinners, to confute errors—in brief, to cry alarm spiritual against foul vice and proud ignorance, wherewith many of my dear countrymen are abused.

iv. I never had mind, and am strictly forbidden by our Father that sent me, to deal in any respect with matter of state or policy of this realm, as things which appertain not to my vocation, and from which I gladly restrain and sequester my thoughts.

v. I do ask, to the glory of God, with all humility, and under your correction, three sorts of indifferent and quiet audiences: the first, before your Honours, wherein I will discourse of religion, so far as it toucheth the common weal and your nobilities: the second, whereof I make more account, before the Doctors and Masters and chosen men of both universities, wherein I undertake to avow the faith of our Catholic Church by proofs innumerable—Scriptures, councils, Fathers, history, natural and moral reasons: the third, before the lawyers, spiritual and temporal, wherein I will justify the said faith by the common wisdom of the laws standing yet in force and practice.

vi. I would be loath to speak anything that might sound of any insolent brag or challenge, especially being now as a dead man to this world and willing to put my head under every man's foot, and to kiss the ground they tread upon. Yet I have such courage in avouching the majesty of Jesus my King, and such affiance in his gracious favour, and such assurance in my quarrel, and my evidence so impregnable, and because I know perfectly that no one Protestant, nor all the Protestants living, nor any sect of our adversaries (howsoever they face men down in pulpits, and overrule us in their kingdom of grammarians and unlearned ears) can maintain their doctrine in disputation. I am to sue most humbly and instantly for combat with all and every of them, and the most principal that may be found: protesting that in this trial the better furnished they come, the better welcome they shall be.

vii. And because it hath pleased God to enrich the Queen my Sovereign Lady with notable gifts of nature, learning, and princely education, I do verily trust that if her Highness would vouchsafe her royal person and good attention to such a conference as, in the second part of my fifth article I have motioned, or to a few sermons, which in her or your hearing I am to utter such manifest and fair light by good method and plain dealing may be cast upon these controversies, that possibly her zeal of truth and love of her people shall incline her noble Grace to disfavour some proceedings hurtful to the realm, and procure towards us oppressed more equity.

viii. Moreover I doubt not but you, her Highness' Council, being of such wisdom and discreet in cases most important, when you shall have heard these questions of religion opened faithfully, which many times by our adversaries are huddled up and confounded, will see upon what substantial grounds our Catholic Faith is builded, how feeble that side is which by sway of the time prevaileth against us, and so at last for your own souls, and for many thousand souls that depend upon your government, will discountenance error when it is bewrayed [revealed], and hearken to those who would spend the best blood in their bodies for your salvation. Many innocent hands are lifted up to heaven for you daily by those English students, whose posterity shall never die, which beyond seas, gathering virtue and sufficient knowledge for the purpose, are determined never to give you over, but either to win you heaven, or to die upon your pikes. And touching our Society, be it known to you that we have made a league—all the Jesuits in the world, whose succession and multitude must overreach all the practice of England—cheerfully to carry the cross you shall lay upon us, and never to despair your recovery, while we have a man left to enjoy your Tyburn, or to be racked with your torments, or consumed with your prisons. The expense is reckoned, the enterprise is begun; it is of God; it cannot be withstood. So the faith was planted: So it must be restored.

ix. If these my offers be refused, and my endeavours can take no place, and I, having run thousands of miles to do you good, shall be rewarded with rigour. I have no more to say but to recommend your case and mine to Almighty God, the Searcher of Hearts, who send us his grace, and see us at accord before the day of payment, to the end we may at last be friends in heaven, when all injuries shall be forgotten.

Artillerists, who have always been a breed apart, no matter what the nationality (and in the 18th century, American, British, French, and German gunners all wore blue coats faced red, as a symbol of their guild-like international commonality) celebrate their own patron, St. Barbara, on December 4th.

Because of my re-enacting experience, I am either a member of, or have been a guest of, the messes of regiments of all four major ethnic groups of the British Isles. I have dined with the Royal Welch Fusiliers (23rd Regiment of Foot) officers' mess on March 1st, with the Friendly Brothers of Saint Patrick on March 17th, with the officers' mess of the Black Watch (Royal Highland Regiment, or 42nd Regiment of Foot) on November 30th, and with the Loyal and Friendly Society of the Blue and Orange on April 23rd (St. George's Day).

These evenings are convivial occasions, with a formal dinner, many, many toasts, and seemingly eccentric regimental customs. You would not want to drive yourself home after one of these dinners. Re-enactor officers are just being true to the characters they portray in these celebrations. But 18th century officers could not be pulled over for DUI.

John Peebles, an officer of the grenadier company of the 42nd Regiment celebrated St. Andrew's Night thus in his New York-area garrison in 1779:

Went to town to celebrate the day with his Ex (he mounted a round blue device with a white Saint Andrew's cross in his regulation highland bonnet-GTF): where the field offs. & Capts. of the 42nd. were invited, the Adml. there the offrs. of the Royal Highland emigrants & some others, about 24 in all. Major Small personated the Saint who gave very good toasts & apropos for the occasion. The Adml. very chatty & entertaining. Major Hay sang some good songs & spouted a prologue very well. A good dinner & drink till 10 o'clock. A numerous party of the Sons of St. Andw. din'd at Hick's above 60, among whom were the subs. (subalterns: lieutenants and ensigns- GTF) of the 42d. Exchanged a complit. & some of our Compy. join'd them after we broke up, & made a night of it.

I wish my Scottish friends of the 42nd, 71st, 74th, and 84th Regiments of Foot a happy Saint Andrew's Day, with much enjoyment of haggis and that amber-coloured beverage distilled in the Highlands. 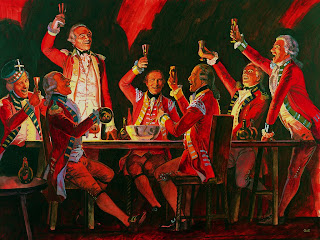 Today, the Church celebrates Saint Andrew, brother of Simon Peter, disciple of John the Baptist, and Apostle of the Lord.

Andrew was a fisherman from Capharnaum. He was with John the Baptist at the time of the baptism of the Lord, and followed Him from that time, later bringing Peter into the fold of the apostolic college. It was Andrew who reported the state of the food supply to the Lord before the feeding of the five thousand. But ortherwise, he appears to have faded into the apostolic group.

Andrew exercised his ministry in the region of the Black Sea, and was crucified on an "X" form crucifix at Patras in Achaia. He is the patron of fishermen and fishmongers, as well as patron of Scotland.

“Hail and blessed
be the hour and the moment
when the Son of God was born
of the most pure Virgin Mary,
at midnight,
in a stable,
in Bethlehem,
in the piercing cold.
In that hour vouchsafe,
O my God,
to hear my prayer
and grant my desires,
through the merits
of Our Savior Jesus Christ,
and of His Blessed Mother.
Amen." 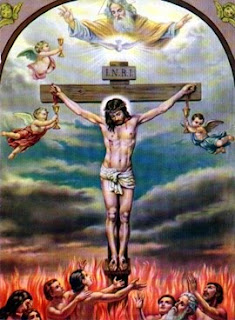 O Lord, Jesus Christ, through the Sacred Blood that Thou shed during Thy Crucifixion, please deliver all the souls of the departed, in particular those of my father, my mother, my brothers and sisters, my relatives, my benefactors, and lead them to eternal joys, so that they may glorify and praise Thee in eternity.
Amen.
Pray 1 Our Father, 1 Hail Mary 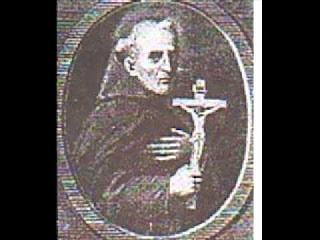 Saint Leonard of Port Maurice, please pray for us!