So Much Good Stuff It Is Astonishing

King Richard's looks to be another great source for Catholic liturgical needs. 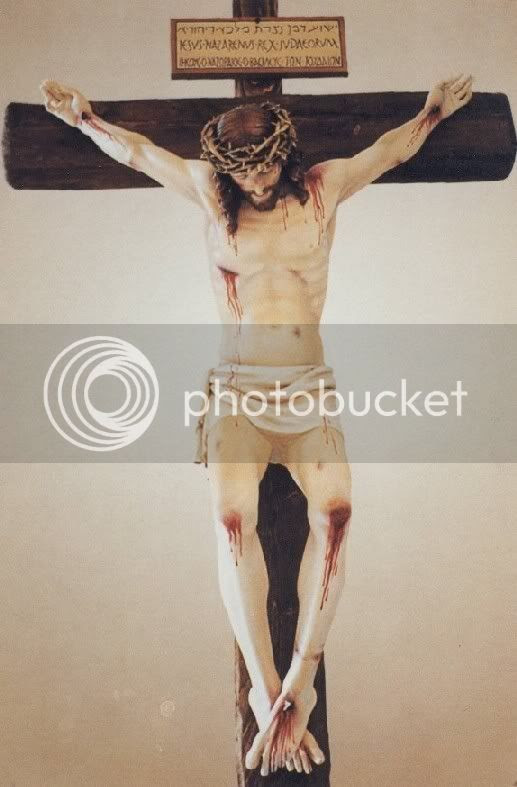 So many crucifixes one finds here are so bland, depicting no wounds or suffering. At most, there is a little blood trickling from the hands, feet, and side of Our Lord. And maybe a drop or two from the crown of thorns. But the reality was much more like The Passion of the Christ than the infamous "Resurrection Crucifix", or, as I call it, "always Easter, and never Good Friday."

This crucifix is obviously 20th century, as it accurately depicts the method of nailing Our Lord's hands to the Cross (and that appears almost never before the 20th century). it is from Italy, and there is a legend about the wounds giving off a perfume. It is pretty moderate with regard to the level of bloodiness. Perhaps a little too sterile, as it doesn't really reflect the marks from the scourging.

Be that as it may, I would love to have a Crucifix like this one. It is so very well done that it stands out remarkably from what we are used to.

Cal Ripken, Jr. and Tony Gwynn deservedly ae now memorialized at Cooperstown. Boston's Jim Rice and Pittsburgh/New York's Rich Gossage remain in the offing. Both should end up there eventually.

The main news story was the slap-down administered by the baseball writers who vote to Mark McGwire, for his use of steroids, which calls into question the legitimacy of his homerun record.

And then, like the boy in the bubble, there is Pete Rose, who achievements undoubtably merit entrance into the Hall of Fame, but whose gambling behaviour precludes him on moral and ethical grounds.

The two cases are not similar, and of the two, I would much rather see Rose enter than McGwire.

I see that, with the new year, Baronius Press has come out with a series paperback Catholic classics, including two by Monsignor Robert Hugh Benson: Come Rack! Come Rope! and The Lord of the World.

They are still working on the 1962 edition of the Roman Breviary, which will be a great adjunct to their wonderful updated 1962 Missal.

Aside from every Nigerian with computer access, all of whom seem to think I have the IQ of a radish, and therefore am ripe and ready to turn over all sorts of personal data to them for some sort of get-rich-quick scheme, the UK National Lottery seems intent on telling me I've won something I never entered. Dozens of times per day. And no matter how many times I mark it as spam, Yahoo keeps sending it right through.

For the record, I don't know, or really care to know, anyone named Ali, Hasan, Mohamed, or anyone in the entire continent of Africa. Also for the record, I never have, and never will enter the UK National Lottery.

So anything addressed to me from any of these sources is spam, and can be trashed without even showing up in my bulk folder. OK, Yahoo?

I read this morning of the death of actress Yvonne DeCarlo, known to me growing up as Lily Munster(since I watched the show in reruns nearly every afternoon for a few years). She also played Moses' wife in The Ten Commandments, and was, in her time, a strikingly beautiful lady. She was 84. Requiescat in pace.

Catching Up A Bit

I must admit that I haven't been the most ardent reader of blogs these last 4 weeks. I've scarcely kept track of news events, since they have such a dark and disasterous hue, with Democrats taking over both the US Congress and the Massachusetts State House. And computer access has, at times, been iffy at best. Far better, it has seemed to me, to enjoy Christmas to its full with loved ones, and re-read some Patrick O'Brian (HMS Surprise and The Mauritius Command).

So, what have I missed? Not much.

There is still no motu proprio on the Latin Mass issued from the Holy See. But, as ever, its release is said to be "imminent."

The arch-bishop-designate for Warsaw had to resign in disgrace just before his scheduled installation Mass, after it was revealed that he had been a spy for the former Communist regime. That speaks volumes about the utterly terrible manner in which bishops, archbishops, and cardinals are appointed in the Church, the utter lack of candid information that reaches the Holy Father, the gaping chasm of personal knowledge of the personality of the men who get appointed. We have seen it here with some of his appointments to US sees, like San Francisco.

Holy Trinity is still looking down the cannon's mouth, with closure seemingly more assured than ever, and the Latin Mass on the move soon to Newton.

Hillary Clinton is having a devil of a time with a little tempest in a teapot for freshman senator Barak Obama. We wish her many more such.

Control of the US Senate remains up in the air, hinging on the health of an ailing Democrat senator from a state with a Republican governor.

Iran and Syria remain to be dealt with, but no one has the guts to do it, or even talk about it.

Jimmy's Harborside restaraunt was demolished. I ate lunch there my one and only time on one of the days of the bar exam back in 1989, since it was held practically next door.