Virgin and Child On the Crescent Moon, Austrian, 1440-1450, poplar with polychomy, from the collection of Boston's Museum of Fine Arts

According to Wolfgang Hofstätter (letter to Hanns Swarzenski, MFA, September 23, 1965), this was the central sculpture of an altarpiece at the parish church of Krenstetten. When the church burned in 1787, the Madonna was salvaged and removed to a nearby building, where it was rediscovered after World War II.

The Golden Legend on the Conversion of St. Paul

Praying For Our Blogging Collegues

Two prominent members of St. Blog's are in need of your prayers and mine, I see as I scan various blogs.

Please keep the Prices in your prayers, as Heather is facing a difficult pregnancy.

And even more alarming, it seems that the Catholic Caveman had a close brush with an untimely demise but averted it through intestinal surgery.

We got our first measurable snow of the winter last night. There has been some flakiness in the air (especially near the new governor's office) several times, but last night, Boston got a coating of snow.

There is snow falling now, lightly, and this may continue for a while, despit ethe sun trying to break through. And Thursday and Friday are supposed to be quite uncomfortably cold, with raw temperatures in the low teens (for the high!) and wind chills well below zero.

Winter arrives. At least we have the consolation that it arrived late, thanks to El Nino.

Red Sox Spring Training Starts In About A Month

I'm afraid that is all the consolation Patriots fans have after Sunday's loss to the Colts. The game seemed in hand at half-time, but both the Patriot defense and offense shut themselves down in the second half. They pretty much just mailed in that second half performance, and thus richly earned the chance to work on their golf games two weeks ahead of the tema going to the Super Bowl.

Traditionally, pitchers and catchers report to Red Sox spring training some where slightly before or after February 15th. Then the rest of the players are there by February 21st. These dates have been modified by more recent, and more lax, spring training regimens, so that the actual dates may be a few days later. And exhibition games start in mid-March.

So New Englanders have just the dog-assed, perpetual also-ran Bruins and Celtics to occupy them for the next month. This is the bleakest part of the year for New England sports fans. But we endure it annually. And, hey, the daylight is getting about 3 minutes longer with each passing day. So, at least that is something. 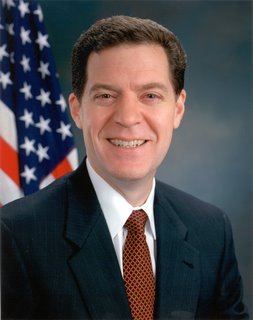 Over the weekend, Senator Sam Brownback announced his candidacy for the presidency in 2008. In my estimation, he is the only genuine conservative in the race, with the possible exception of the even-more-obscure Rep. Duncan Hunter. I find the prospect of McCain or Guiliani becoming the Republican nominee anathema. Having lived with Mitt Romney as governor for 4 years, I see nothing there that I want in a Republican nominee, let alone president.

Senator Brownback is a solid conservative, and has the added appeal of being a recent convert to the Faith, and a serious one at that. I always support the rightward-most viable candidate. Senator Brownback is that. So he has Recta Ratio's full support.

What this country needs badly now is principled conservative leadership to carry on the often-excellent work of President Bush. We need more Supreme Court nominees in the mold of Chief Justice Roberts and Justice Alito (to say nothing of Justices Scalia and Thomas). We need dynamic, conservative, growth-oriented economic policies designed to maintain the United States' global economic dominance through a reliance on free markets, less government spending, and less taxation and regulation at every level. We need to preserve our culture by saying, decisively, finally, at the national constitutional level, "NO!!!!" to gay "marriage" and civil unions. We need to preserve our culture by insisting on English as the national language, in use everywhere. We need to preserve our culture and restore justice by ending so-called "affirmative action." We need to preserve our culture by vigorously enforcing the laws against illegal immigration, stopping the influx at the border, and hunting down, rounding up, and sending back those here already in violation of law. And we need to restore a shattered US military, hone it for the job ahead in the War on Moslem terrorism, and prepare it for new challenges that the next decade might bring it in the Korean Peninsula, in the Straits between China and Taiwan, in Libya, In Iran, in Syria, in Venezuala, in Cuba, or wherever our interests require that they be sent.

And Senator Brownback is the one candidate whose positions are close enough to these ideals to suit me, and the nation.

I won't say that my initial choices have always been successful. In 1976, 1980, and 1984, I was wildly, avidly, staunchly for Reagan. In 1988, I backed Jack Kemp, who seemed to me the annointed conservative successor to President Reagan. In 1992, I stayed loyal to President George H. W. Bush, thankful for his excellent leadership in the Gulf War, and for the Clarence Thomas nomination to the Supreme Court. In 1996, at this stage in the proceedings, I was supporting Senator Phil Gramm. In 2000, I flirted with other possibilities before settling with then-Governor Bush.

I wish Senator Brownback a very successful campaign for the Republican nomination, and for the White House itself. The country needs him. God speed his candidacy.

For the Millions Murdered Under Color Of Law In the USA

From the General Instructions for the Roman Missal:
373. ... In all the dioceses of the United States of America, January 22 (or January 23, when the 22nd falls on a Sunday) shall be observed as a particular day of penance for violations to the dignity of the human person committed through acts of abortion, and of prayer for the full restoration of the legal guarantee of the right to life.
Via Ten Reasons

When I was a kid in the 1960s and 1970s, toy soldiers were so unrealistic looking, that it was hard to really envision them n a battle. If they were not in parade-ground postures, they were posed so stiffly that one had no idea they were supposed to be engaged in desperate activity.

No more.
This is what toy soldiers looked like when I was a kid:

Here is a little sampling of images from the Conte Collectibes site, using figures, vehicles, and terrain from Conte, 21st Century Toys, and Forces of Valor.

And, yes this is a chance to show off my new system of topic specific sub-albums in my Photobucket account. Smart of you to pick that up.

For more of these terrific dioramas, which, to me, are the quality work you would find in a museum exhibit of 30 years ago, check this out.