Hear Him! Hear Him!

Athanasius makes good solid sense, a jibe a poor President Bush (who gave us the recent Supreme Court victory on partial birth abortion via his judicial appointments) notwithstanding, on the matter of proper, restrained use of alcohol and gentlemanly behavior.

My own drinking habits are even more temperate than his. Christmas, New Year's, and St. Patrick's Day (with St. David's, unless it is already Lent, and St. George's and St. Andrew's thrown in). Very few occasions beyond that.

I like my pipe, or a cigar. And I see what looks like a pipe among Athanasius' table of liquors. But as vices go, that is minor. As with drinking, moderation is the key. One or two drinks, and then, no more. A pipe of tobacco a day, or a cigar once a month or so. Life's pleasures are a wonderful thing, to be savored, not swinishly wallowed in.

Indeed, if only athletes, actors, rock stars, rap "artists" and the rest of the pond scum that floats on the surface of "society" were imbued a modicum of self-restraint. They occupy the attention of the public because they are famous, and because they have money. Too bad that gentleman-like behavior is not ingrained in everyone with money. As things are, nearly all of them are in the scandal-sheets daily for some new outre behavior. Whether it is Mel Gibson and his drunk-driving (and the lack of restraint that led him to get blotto in public, then driving like that is probably the same lack of self-restraint that led to the public airing of his views on Jewish people, views that, if held, ought not to be expressed ever), or Britany Spears entering a detox, or the fellow who played Kramer letting loose a bigoted tirade at black people, lack of self-restraint is the tragic flaw that underlies all of this bad public behavior.

And bad public behavior is only the tip of the iceberg. Alec Baldwin (wasn't he supposed to be living in exile in France by now?) gave his teenage daughter his frank opinion of her behavior. Regrettably, his remarks became public, though intended as private. And the unrestrained nature of those remarks has him in hot water with various people who think children ought to be endlessly molly-coddled. Had be been more temperate in his statements, though private, there would be no controversy. If he had said, "I am very disappointed in you. I believe the schools I have been paying for you to attend should be doing a better job in conditioning you to act like a lady. You need to do ____________ to regain my approbation," who would have cared?

Can you imagine Jimmy Stewart having this problem?

Self-restraint. It is the antithesis of the "it's all about me, and what I want, and how I want things" generation. Self-restraint means putting something other than one's immediate swinish pleasures first. It involves setting standards and living up to them. It doesn't say the things it really wants to say. It doesn't take the drink it really wants to after a pleasant buzz has set in. It never makes a scene. It thinks about others and their needs first. It subordinates ego to superego in the interest of the family, or of society, or of the Church, or of the state. It is the necessary ingredient for leadership, whether of a family or of a corporation, or of a government. People respect and will gladly follow those who consistently act with self-restraint. They have less respect for those who do not show such self-restraint, because they have not earned it.

I found this little gem via Dom Bettinelli.

May 5th? The chiropodist of a friend of a friend of my cousin Francis Xavier the Raving Irish Drunk had it right from the mouth one of the secret cats kept in the Holy Father's apartment. All he had to do was ply the tabby with Cool Ranch Doritos and slices of smoked turkey breast and the feline spilled the beans on the Holy Father's whole plot to liberalize the traditional Mass.

If they were going to issue it next week, it would be being translated now, and something more definative, like a draft of the text, would have leaked out of the sieve-like bureaucracy of the Vatican.

Are You A Gentleman?

Via The Cafeteris Is Closed

Sounds like just the sort of bishop needed in every see in the world!

Putting the Genocide That Is Abortion In Historical Context

Ad Majorem Dei Gloriam does it nicely, with Xs.

Daniel Mitsui at The Lion and the Cardinal has a great post up on this topic, with illustrations of the rogation procession from Les Tres Riches Heures du Duc de Berry.

With St. George's Day come and gone, I wanted a new banner image for the old blog. I like to change things around once in a while, just to keep things fresh. I instantly felt drawn to this new one. It is the ruins of the monastery at Kilmacduagh, in Co. Galway, Ireland, just on the edge of the Burren, so it is near my family's native Co. Clare. 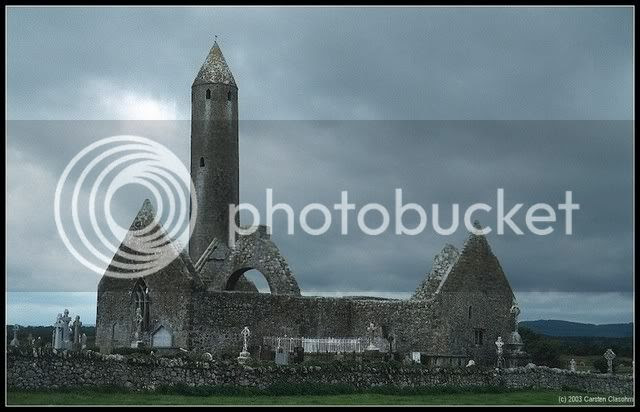 This is another view of the ruins.

This cathedral and monastery site has the ruins of several churches, the oldest founded by St. Colman before he took himself to the Burren for true seclusion. Once, this monastery and church were the core of a new diocese. The diocese is gone now, merged with the Diocese of Galway. The monastery was plundered many times by Vikings, and finally by prottie "liturgical reformers" at the bidding of Henry VIII, Elizabeth I, and Cromwell.

Today, cattle graze among the ruins. And so far from being even a thriving tourist center, one obtains the keys to inspect these ruins by applying to the landlady of a local B&B. I couldn't make that up. 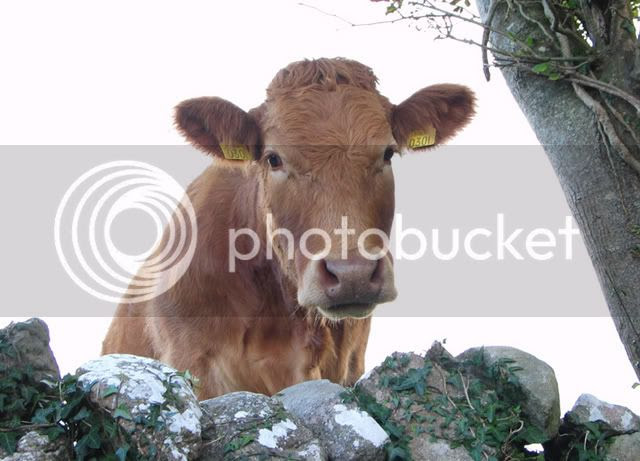 What better to illustrate the opening of the Book of Lamentations. Quomodo sedet sola civitas. Thus sits the once-thriving city, now desolate. The fate of this monastery might well be the fate of all Christendom, if we do not rouse ourselves, and get on the ball. There will be no patrimony to pass on to what few descendants we allow to be born, except bare, ruined choirs, tumbledown naves, and the odd crumbling tower pointing to heaven for a generation of barbarians who don't even know what Heaven is.

This is pretty muh what we know about the Evangelist of the second Gospel:

He is believed to have been a resident of Jerusalem, and a boy at the time the Lord was present in human form on earth. It is thought that his family home was a gathering place for the Apostles, and may have provided the "Upper Room" in which the Last Supper was held (and where the Apostles were gathered on Easter Night, on the following Sunday night, and where they were when the Holy Ghost came to them on Whitsunday).

Mark is believed to have been baptized by Saint Peter, who probably was the source of information for Mark's Gospel. Mark became an associate of Saint Paul and Saint Barnabas in their missionary work. He may have become bishop of Alexandria, and may have been martyred during the reign of Trajan.

Tomorrow is both the feast of Saint Mark, and the Major Rogations.

For more on the Rogation Days (both the Major Rogation tomorrow, and the Minor Rogation of Rogationtide (Just before Ascension Thursday) check out Fisheaters. 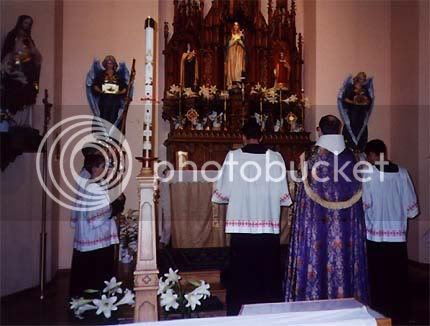 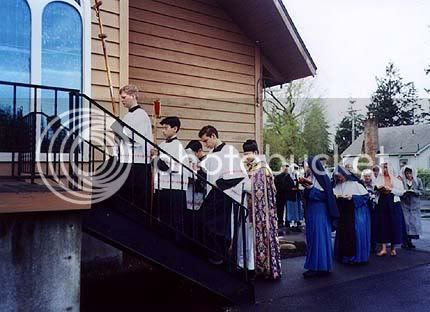 Most of you know that "G. Thomas" stands for George Thomas. And today, April 23rd, is the Feast of St. George, Martyr. Saint George was a Roman soldier and Catholic, who became a victim of the persecution of Diocletian. He is the patron of, among other things, England and soldiers. And since I am not only named George, but for a very big part of my life played the role of a British soldier of the 18th century, this is a very special day for me.

Not much is really known about St. George. The stuff about the dragon is pure myth. But we do know that he was martyred during the persecution of Diocletian.

St. George is a favorite of mine because he is one of the "sword-wielding" saints, along with St. Michael and St. James the Moor-Killer.

The Golden Legend tells us this about him.

As St. George is the patron of England, his feast, like those of St. David, St. Patrick, and St. Andrew, is celebrated in the messes of the British Army to this day. Here is what the Coldstream Guards (or 2nd Regiment of Foot Guards) have to say about the Saint.

Also, George slaying the dragon appears on the regimental markings of the old 5th Regiment of Foot

And on the front of the light infantry's cap badge

Numerous idiotic busybodies want to "unsaint" good St. George because of the dragon stuff. But that would be foolish, as he is a real martyr, and is strongly revered by our separated brethern in the Orthodox churches, not to mention in the recognized Eastern Rites of the One Holy Roman Catholic Apostolic Church.

Shrine of the Holy Whapping

The Red Sox got out their brooms last night, and delivered the Yankees a weekend sweep at Fenway Park. Not that it counts much in April, but the sweep pushed the Yankees 4 games back in the AL East, behind Boston and Baltimore.