A reader once chided me for opting for a "gloomy Gothic" banner illustration for the top of the page here. Knowing that Gothic cathedrals were intended to be painted, not grey, and that over time the paint has washed or worn away so that all we have now seen for well over 200 years is grey, I was puzzled by this remark.

In France, there is the Saintes Chappelle in Paris, the interior of which is anything but grey. When Pugin and others were launching the Gothic Revival in the 19th century, they painted at least the interiors of their churches.

Amiens Cathedral, while it has not been repainted, is showing us today what it was meant to look like, at night, at least, via laser and light. 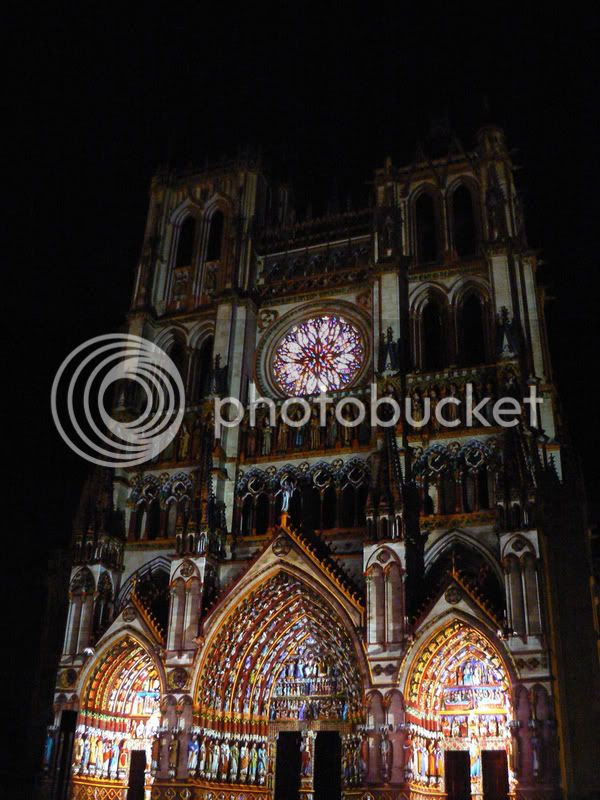 It must be incredibly expensive to do this. I wonder if just painting it properly wouldn't be much cheaper in the long run.

How can any receptacle of the Blessed Sacrament be "terrible," you ask. When its design is not in accord with its sacred purpose. When it reminds you of the world more than the Body and Blood, Soul and Divinity of Our Lord Jesus Christ contained within it. 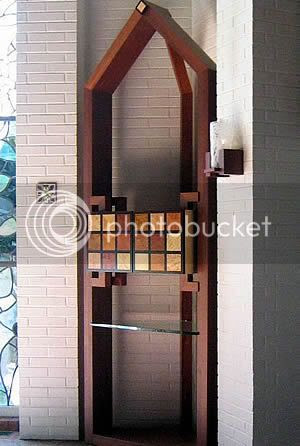 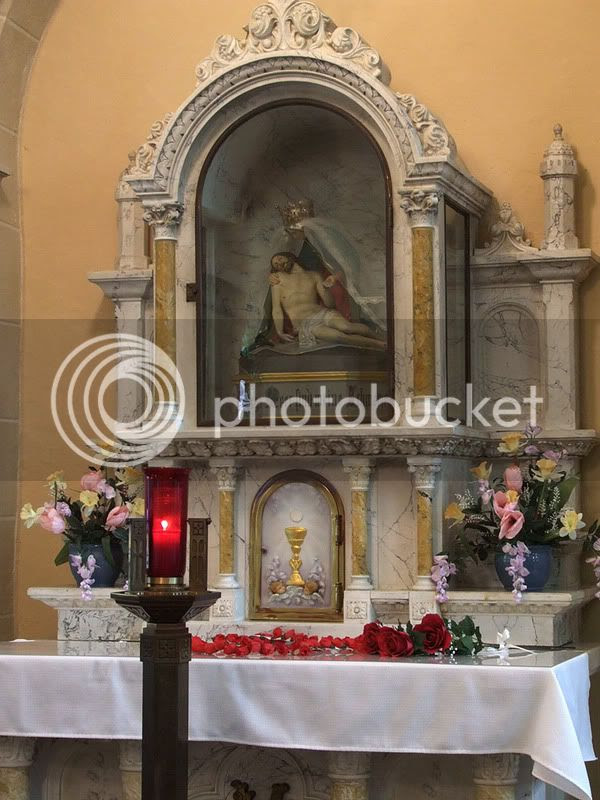 This Tabernacle was photographed by fellow Catholic Restorationist Mark Scott Abeln of Rome of the West. You can see very clearly that all of the elements of a proper Tabernacle are present. This apparently is not the main altar, but that has its own Tabernacle, also in use. The Pieta above it links the Eucharist directly to Christ's sacrifice on the Cross. Just as importantly, it links the congregation to the patron of the church (Our Lady of Sorrows Shrine in Starkenberg, Missouri). 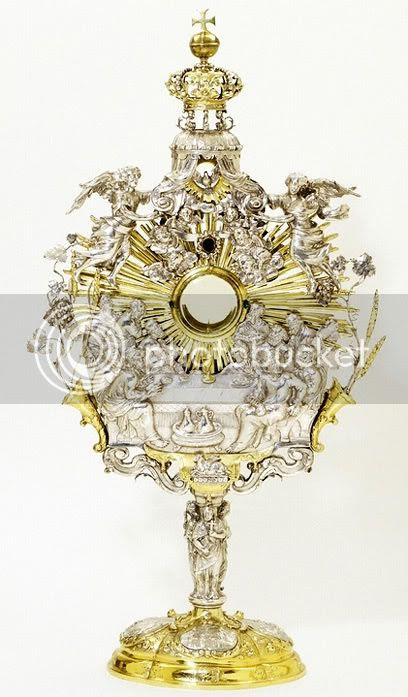 or this for the more architectuall;y inclined: 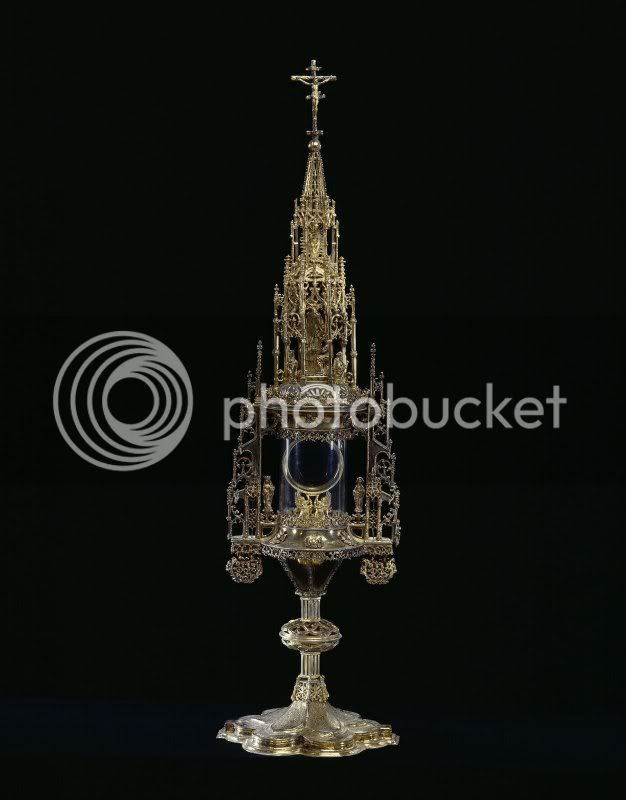 Today we recall the lives and martyrdoms of two of Christendom's greatest saints. Both were high and respected officials in the court of Henry VIII, and both refused to accept King Henry as head of the Church in England. Both were beheaded for their orthodoxy.

For Saint Thomas More, who most know through the magnificent portrayal by Paul Scofield in the 1960s film adaptation of Robert Bolt's play A Man For All Seasons, I offer my very slight adaptation of a prayer More wrote while a prisoner in the Tower of London in 1534, some months before he was martyred.

Give me the good grace, Lord,
To set the world at naught.
To set my mind fast upon Thee
To not hang upon the blast of mens' mouths.

To be content to be solitary.
To not long for worldly company.
To be concerned with the world less and less.
To rid my mind of all the world's busy-ness.

To not long for any worldly things.
To deem unpleasant even hearing the fantasies of this world.
To be gladly thinking of God alone.
To call piteously for His help.
To lean upon God for comfort.
To labor busily to love Him.

To know my own vileness and wretchedness.
To make myself meek and humble under the mighty hand of God.
To bewail my past sins.
To suffer adversity patiently for the purging of them.
To bear gladly my Purgatory here.

To be joyful of tribulations.
To walk the narrow way that leadeth to life.
To bear the Cross with Christ.
To have the last things always in remembrance.
To have my ever-possible death always before my eyes.
To make death no stranger to me.
To foresee and consider the everlasting fire of Hell.
To pray for pardon before the Judge comes.

To have continually in mind the Passion that Christ suffered for me.
To give Him thanks continually for His benefits.
To redeem the lost time that I have wasted.
To abstain from vain discussion.
To eschew light and foolish mirth and merriment.
To cut off unnecessary recreations.

To set the loss of worldly substance, friends, liberties, and life, at naught,
If their loss means the gaining of Christ.

To think my worst enemies my best friends,
For the brothers of Joseph could never have done him so much good
With their love and favor as they did with their malice and hatred.

These attitudes are more to be desired by every man than all the
Treasure of all the princes and kings, Christian and heathen,
Were it all gathered and laid together upon one heap.
Amen.

For Saint John Fisher, who had been chaplain to the Queen Mother before becoming a bishop (he was the only English Catholic bishop who refused to take the Oath of Supremacy) I can only advert your attention to his wonderful Exposition Of the Seven Penitential Psalms, which belongs on the shelf of every Catholic with a desire to repent for his sins through the Penitential Psalms. The Ignatius Press editon, which I read a couple of years ago, and re-read more thoroughly this past Lent, is both faithful to the letter of the original and wonderfully graspable for the modern reader.

Also, check out what Jay Anderson has up: one of the most comprehensive St. Thomas More posts I have seen, and very much worth your time.

Also, Vultus Christi has a wonderful post on these two great martyrs.

What You Miss When You Are Away For the Weekend

I missed the normative mode of the Latin Rite's transferred feast of the Immaculate Heart on Saturday (the traditional feast is August 22nd), Flag Day, Bunker Hill Day (a public-workers' holiday here in the City of Boston), and a Red Sox sweep of the Giants, gaining them another game over the surging Yankees (the fortunes of that team of mercenaries paid for by Steinbrenner reminding us all that evil doesn't just die quietly, it just keeps surging back, and often triumphs for years at a time).

What I did not miss was the publication of the motu proprio on the traditional Mass. Didn't miss it because, despite all the expectations of imminence last Friday, it still isn't published. Now, sources say maybe before the Holy Father takes his summer vacation, maybe after. Who knows with these things, and you try translating a document into 28 languages!

And now, about 100 emails piled up in the Inbox, surprisingly few of which are spam.