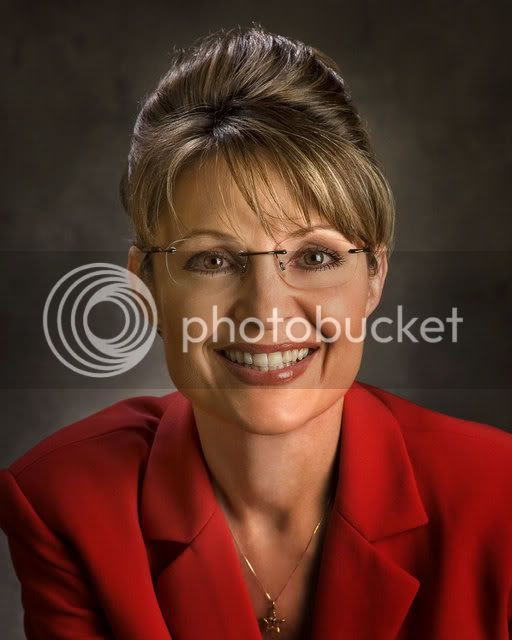 Lefty Meterosexual On Bicycle Versus Real Woman With A Hog

Thanks to Mark Sullivan for this gem of a comparison!!!

Two pictures worth a million words.

A Truly Excellent And Worthy Pick

I was out of reach of the computer yesterday when Senator McCain announced his VP pick, Governor Sarah Palin of Alaska, so missed out on the initial barrage of commentary. I've had a night and a morning to think about it, and I have to say that Senator McCain has done himself, the nation, and the Republican Party a very great good service by picking her.

First, let's look briefly at the down sides.

1) Your VP pick should bring you a state you can't get by yourself. If McCain was in danger of losing Alaska, he might as well have just said, "Uncle!" before Labor Day, and save the country the expense of an election. In terms of Electoral College politics, Alaska should have been firmly in the GOP camp anyway, so he would have been better off with someone like Bill Simon, who just might bring in California by the back door as a native son.

Mondale in 1984 brought in Ferraro (also from a state he should have been able to count on) in order to try to trump the Electoral College by swinging the votes of women in every state. It didn't work then, and it probably won't work now.

My answer to that: Geraldine Ferraro was a divisive feminist, pro-abortion, essentially lapsed Catholic, extreme liberal, quasi-socialist. Women generally did not identify with her. She came off as a career-first-and-the-rest-be-damned feminist. She just further polarized the 1984 election in a manner favorable to President Reagan.

I think Sarah Palin is a very, very different type of woman, whose sterling pro-life credentials (my gosh, the woman and her family have not just talked the talk, but walked the walk, as, I would add, has Senator McCain personally). I think she is the kind of woman who has successfully balanced family and career in a way many more women can identify with today. Her presence on the ticket just might swing many female voters in swing states.

It is too early to estimate (and will be until at least late September) what effect this pick will have in key Electoral College battleground states. But I predict that, coupled with a good presentation at the convention this coming week and a good national media campaign, this will put some states in play that were not in play before, and solidify McCain's base.

2) Experience gap. Dan Quayle. Barack Obama. Empty suits lacking the experience necessary to assume national leadership when needed. Well, to start, I would take exception with this argument in regard to former Vice President Quayle, as I always thought him severely underrated and unjustifiably belittled.

Is Governor Palin as empty a suit as Barack Obama? I will concede that she does not bring to the ticket the kind of experience that George H.W. Bush, Lloyd Bentsen, Al Gore, Dick Cheney, and Joe Biden brought to their tickets. Her political resume is considerably shorter than that of Senator McCain himself (though it compares favorably to that of Barack Obama himself!). I don't think that, with McCain at the top of the ticket, anyone is seriously going to label the GOP ticket as lacking in experience. True, Palin has only been governor of her state for a couple of years (but that didn't stop anybody from trying to push Governor Bobby Jindal's name). But McCain's extensive experience at the top of the ticket trumps anything on the Democrat side.

Those negatives examined, and dealt with to my satisfaction, I have to say that I like this pick a lot. It brings something new and fresh to the political landscape, without compromising conservative Republican ideals one bit. I must say that, after controlling Congress for so long, as well as holding the White House and many governorships over the last 20 years, I was disappointed with how thin and undistinguished the national GOP bench had seemed. I was quite nonplussed at the prospect of Romney, Ridge, Lieberman (great leaping bulldogs, the man isn't even a Republican!, and is a liberal on anything that doesn't touch on Israel's security!) or even Kay Bailey Hutchinson. Rick Santorum, Sam Bronwback, Bobby Jindal, Bill Simon, Mike DeWine, and Tim Pawlenty are all great guys, who might someday replace in stature and electability Jack Kemp, Phil Gramm, Jesse Helms, and Strom Thurmond as the heart of the Party. But that day hasn't come yet.

One item really leapt out at me as I compared the two tickets. On the Republican side, at the top of the ticket, we have a guy who, as the son of an admiral, could have got a free ride out of the daily beatings, physical and psychological torture, and horrid conditions of a North Vietnamese prisoner-of-war cell, but refused, who stayed with his comrades when he could have got a "Get Out Of the Hanoi Hilton Free" card. At the bottom of the ticket, we have a wife and mother who has just recently chosen life for and opted to raise a child with Downs' Syndrome, become mayor, then governor of her state, overcoming challenges that few would be willing to face.

Now, look at the Democrat ticket. At the top, we have a guy who has battened at the government trough (and his wife at the academic one) for his whole career, and while he makes speeches that are said to be uplifting, still seems to me dreadfully unsure of who he really is, and how he really feels about the USA. Or maybe he has become very adept at using "uplifting" rhetoric to mask an underlying dislike for what this country stands for. Michelle Obama's unguarded comments about never feeling proud of the US until her husband looked to have the nomination nearly locked up, and their relationship with Jeremiah Wright tell me all I really need to know about them. And on the bottom of the ticket, we have a guy who is best known for plagiarizing the speeches of the leader of the British Labour Party when he himself ran for president, so, so long ago, and who wants to shove his rosary down peoples' throats.

Looks to me as if character issues swing to the Republicans pretty markedly.

McCain has really made a smart move. I think this will shore up the base, and make an election that I have been in fear would become a Democrat rout at every level a real battle. The odds are still tough. But I think McCain has helped himself and the Party as much as he could. 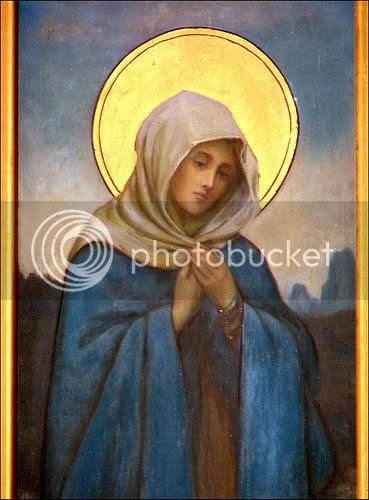 Most holy and immaculate Virgin! O my Mother! Thou who art the Mother of my Lord, the Queen of the world, the advocate, hope, and refuge of sinners! I, the most wretched among them, now come to thee. I honor thee, great Queen, and give thee thanks for the many favors thou hast bestowed on me in the past; most of all do I thank thee for having saved me by thy help from Hell, which I had so often deserved. I love thee, Lady most worthy of all love, and, by the love which I bear thee, I promise ever in the future to honor thee, and to do what in me lies to win others to thy love. In thine intercession I put all my trust, all my hope of salvation. Receive me as thy servant, and cover me with the mantle of thy protection, thou who art the Mother of mercy! And since thou hast so much power with God, implore Him to deliver me from all temptations, and obtain for me the grace ever to overcome them. From thee I ask a true love of Jesus Christ, and the grace of a happy death. O my Mother! by thy love for God I beseech thee to be at all times my helper, but above all at the last moment of my life. Cease not thy supplications until thou seest me safe in Heaven, there for endless ages to bless thee and sing thy praises. This is my hope.
Amen.

From The Glories Of Mary, by Saint Alphonsus Liguori 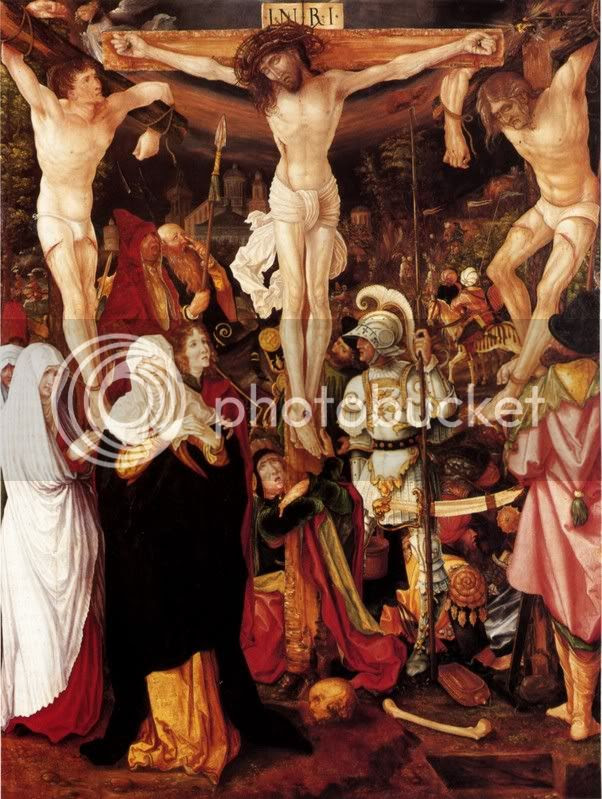 O Lord Jesus Christ, to Thy Most Sacred Heart, I confide this intention
(state it).
Only look upon me, then do
what Thy love inspires.
Let Thy Sacred Heart decide...
I count on Thee...
I trust in Thee...
I throw myself on Thy mercy.
Lord, Jesus, Thou wilt not fail me.

Sacred Heart of Jesus,
I trust in Thee.

Sacred Heart of Jesus,
I believe in Thy love for me.

Sacred Heart of Jesus, I have asked Thee for many favors, but I earnestly implore this one. Take it, place it in Thine open Heart. When the Eternal Father looks upon it, He will see it covered with Thy Precious Blood. It will be no longer my prayer, but Thine, Jesus.

Sacred Heart of Jesus,
I place all my trust in Thee.
Let me not be disappointed.

Am I Paying Attention To the Denver Democrats?

Are you joking? Of course not.

I know where they stand, and where I stand. The chasm between us is unbridgeable, short of the Democrat Party completely reversing where it stands on national defense and foreign policy, taxation, regulation of business, the role of the federal judiciary, abortion and other life issues, gun control, feminism, states' rights, immigration, national health care, patriotism issues, "affirmative action," and just about every other issue.

The only reason I would be watching would be to find ammunition to fire back at them. And Rush is so much better at that than I am.

So I am saving myself the aggravation and agitation, and ignoring their proceedings.

And if, God help the Republic, they win in November? It will be time to retreat back to studying Fisher Ames, Orestes Brownson, and Edmund Burke more closely.

Rush On Pelosi On Abortion

This reminds me of what I have said about Rush a few times now. Despite the personal life problems, I sense a soul that yearns for the truth. And I believe that soul will eventually find the truth in the One, Holy, Catholic, and Apostolic Church. Maybe not soon, but someday.

For a long time, I have been under the delusion that I was outgrowing my hayfever. I suffered greatly as a child, living on the edge of a wooded area, but the last decade, living in the city, I have had little trouble with ragweed. But this year, the itchy roof of the mouth, lips, inner ear, and sneezing and runny eyes and congestion have announced that my hayfever (late-summer-fall ragweed) is not only back, but has been joined by a new friend, a mold allergy that I had never noticed before. I am not sure whether these allergies are becoming more severe now, or whether this year, which has been fairly rainy, is just a particularly favorable one for ragweed and mold.