Our Blessed Lady of Mount Carmel 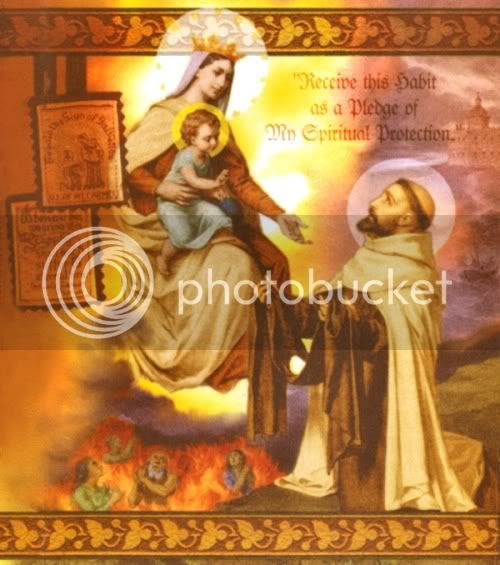 Strongest of armor,
We trust in thy might:
Under thy mantle,
Hard press'd in the fight,
we call to thee.

I have a special devotion to Our Lady of Mount Carmel. For one thing, July 16th is my birthday. For another, when I returned to an active practice of the Faith many years ago, it was largely through the Carmelites. As I started to become active in the Church again, a Carmelite priest heard my first confession in about ten years. At the time I was a bachelor without very much in the way of direction or guidance. And the Carmelite Gift shop at the North Shore Shopping Center was where I bought so many books that fed my hungry soul, books from TAN, Ignatius, Sophia and Liguori. 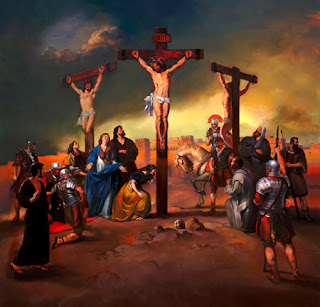 O Supreme High Priest and true Pontiff, Jesus Christ, Who didst offer Thyself to God the Father as a pure and spotless Victim upon the Altar of the Cross for us miserable sinners, who didst give us Thy Flesh to eat and Thy Blood to drink, and who didst ordain that Mystery in the power of the Holy Ghost saying: "As often as thou doest this, do it in remembrance of me"; I ask Thee by this same Blood of Thine, the great price of our salvation, and by that wonderful and unspeakable love with which Thou dost love us so much so as to wash us from our sins in Thy Blood, as miserable and unworthy though we are: I beseech Thee teach me through Thy Holy Ghost to handle so great a Mystery with such great reverence and honor, with such fear and devotion, as are due and fitting.

Through Thy grace make me always to believe and to understand, to conceive and to firmly hold, and to think and speak of this wondrous Mystery in such a way as it pleases Thee and benefits my own soul. Let Thy Holy Ghost enter into my heart where He may silently resound and, without clamor of words, speak all truth. For Thy Mysteries are indeed exceedingly deep and covered with a sacred veil. On account of Thy great mercy grant me to assist at the Solemnity of the Mass with a clean heart and a pure mind.

Free my heart from all unclean, unholy, vain and hurtful thoughts. Defend me with a loving and faithful guard, the mighty protection of Thy blessed Angels, so the enemies of all good may go away ashamed. Through the virtue of this great Mystery and by the hand of Thy holy angel, drive away from me and from all Thy servants the stubborn spirit of pride and vain-glory, of impurity and uncleanness, of doubting and mistrust. May those who persecute us be confounded; may they perish those who make haste to destroy us.
Amen. 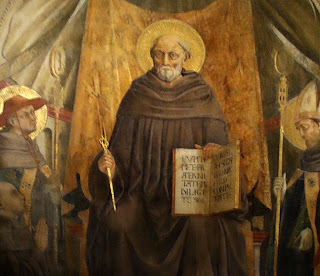 Read about the great act of forgiveness of this great Florentine Saint here at Father Mark's.

The Fourth Sunday After Pentecost

THE fourth Sunday after Pentecost was called, for a long period, in the west, the Sunday of mercy, because, formerly, there was read upon it the pas­sage from St. Luke beginning with the words: 'Be merciful, as your Father is merciful.' But, this Gospel having been since assigned to the Mass of the first Sunday after Pentecost, the Gospel of the fifth Sunday was made that of the fourth; the Gospel of the sixth became that of the fifth; and so on, up to the twenty-third. The change we speak of was, however, not introduced into many Churches till a very late period;1 and it was not universally received till the sixteenth century.

Whilst the Gospels were thus brought forward a week, in almost the whole series of these Sundays, the Epistles, Prayers, and the other sung portions of the ancient Masses were, with a few exceptions, left as originally drawn up. The connexion which the liturgists of the eleventh, twelfth, and thirteenth centuries had fancied they found between the Gospel and the rest of the liturgy for these Sundays was broken. Thus the Church spared not those favourite views and explanations which were at times far­fetched; and yet she did not intend thereby to condemn those writers, nor to discourage her children from perusing their treatises, for, as the holy reflections they contained were frequently sug­gested by the authority of the ancient liturgies, such reading would edify and instruct. We are quite at liberty, then, to turn their labours to profit; let us only keep this continually before us—that the chief connexion existing between the several portions of the proper of each Mass for the Sundays after Pentecost consists in the unity of the sacrifice itself.

In the Greek Church there is even less pretension to anything approaching methodical arrangement in the liturgy of these Sundays. On the morrow of Pentecost they begin the reading of the Gospel of St. Matthew, and continue it, chapter after chapter, up to the feast of the Exaltation of the holy Cross, in September. St. Luke follows St. Matthew, and is read in the same way. The weeks and Sundays of this season are simply named according to the Gospel of each day; or they take the name of the evangelist whose text is being read: thus, our first Sunday after Pentecost is called by them the first Sunday of St. Matthew; the one we are now keeping is their fourth of St. Matthew.

So important is the Sunday's liturgy, destined each week to honour such profound mysteries, that, for a long time, the Roman Pontiffs kept down the number of feasts which were above the rank of semi-doubles; that thus the Sunday, which is itself a semi-double, might not be superseded. It was not till the second half of the seventeenth century that this discipline of reserve was relaxed. Then it was that it had to give way in order thereby to meet the attacks, made by the Protestants and their allies the Jansenists, against the cult of the saints. It was needful to remind the faithful that the honour paid to the servants of God detracts not from the glory of their Master; that the cult of the saints, the members of Christ, is but the con­sequence and development of that which is due to Christ their Head. The Church owed it to her Spouse to make a protest against the narrow views of these innovators, who were really aiming at lessening the glory of the Incarnation by thus denying its grandest consequences. It was, there­fore, by a special inspiration of the holy Spirit that the apostolic See then permitted several feasts, both old and new, to be ranked as of a double rite. To strengthen the solemn condemnation she had pronounced against the heretics of that period, she wisely adopted the course of allowing the feasts of saints to be sometimes kept on Sundays, although these latter were considered as being especially reserved for the celebration of the leading mysteries of our Catholic faith, and for the obligatory attend­ance of the people.

The Sunday, or dominical, liturgy was not, how­ever, altogether displaced by the celebration of any particular feast on the Lord's Day; for, no matter how solemn soever the feast falling on a Sunday may be, a commemoration must always be made of the Sunday, by adding its Prayers to those of the occurring feast, and by reading its proper Gospel, instead of that of St. John, at the end of Mass. Neither let us forget that after the assisting at the solemn Mass and the canonical Hours, one of the best means for observing the precept of keeping holy the sabbath-day is our own private meditation upon the Epistle and Gospel appointed by the Church for each Sunday.

Recently, however, in view of the great increase in the number of festivals of Saints kept by the Universal Church, which had resulted in the Sunday liturgy being very rarely used, the Holy See has thought well to ordain that greater or lesser double feasts falling on Sundays shall be merely commemorated in the Mass and Office of the day. Henceforth the Mass of the season is said on every Sunday throughout the year which is not occupied by a double feast of the first or second class, or by a Feast of Our Lord. Thus the Sunday liturgy is restored to its former high rank in the scheme of the Church's year.