God bless those brave American, British, Canadian, and Free French soldiers who landed in Normandy seventy years ago today, to bring liberty back to Europe and bring down National Socialist tyranny.  God rest those who died or were injured that day, or in the ensuing campaigns in Northwest Europe, as well as those who have died since.  Cherish those still living.  Rededicate ourselves to making our society again worthy of their sacrifice. 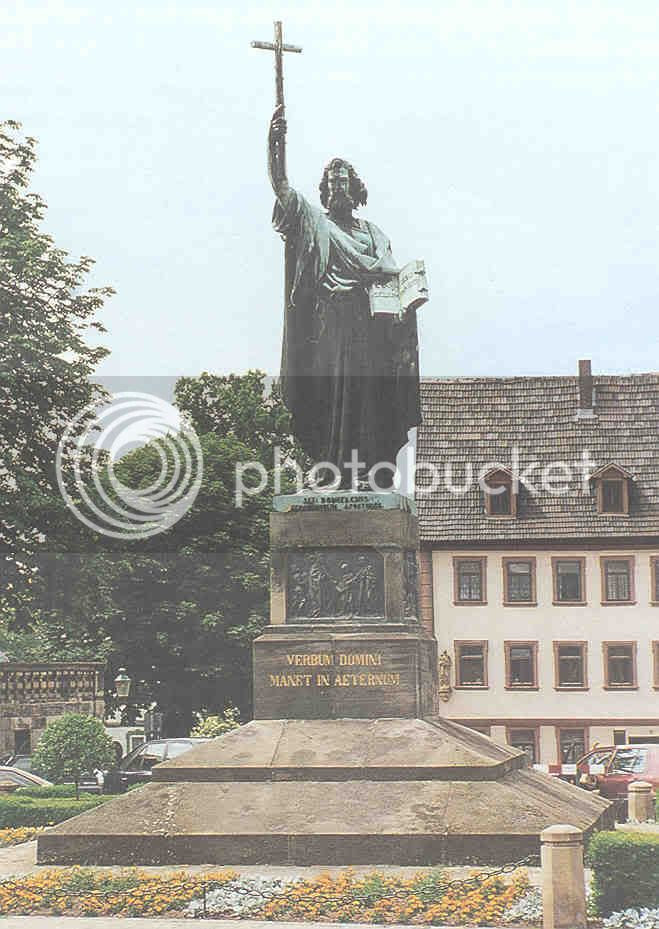 I remember in one of my grade school history survey books, there was a colored picture of a suitably zealous Saint Boniface felling the pagan oak tree as he tried to convert the Saxons of Germany to the Faith. As I recall, the Saint Boniface in that picture looked more like a Viking than an Anglo-Saxon Benedictine.

But at least the image, inaccurate as it was, made the name of St. Boniface stay with me all these years.

Read more about Saint Boniface at Wikipedia, and The Catholic Encyclopedia

A Google image search failed to turn anything like that up. But Breviary.net didn't let us down. 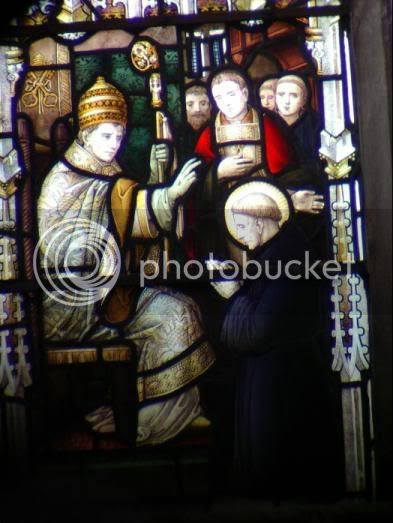 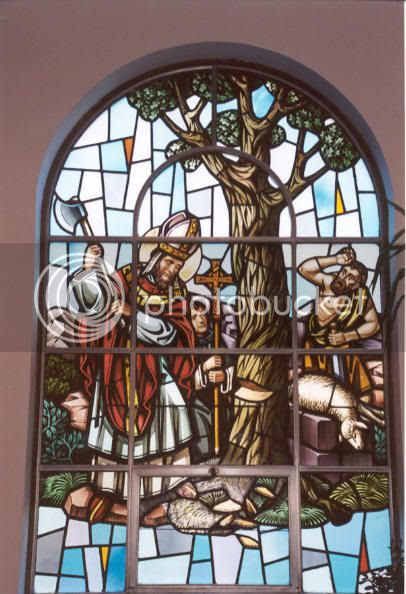 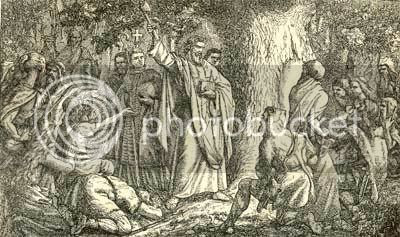 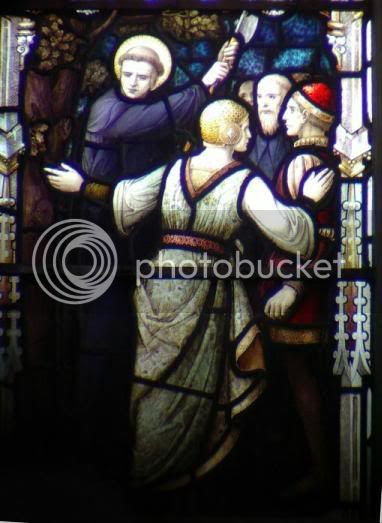 He crowned Pepin King of the Franks, making him a patron of the Carolingian dynasty. 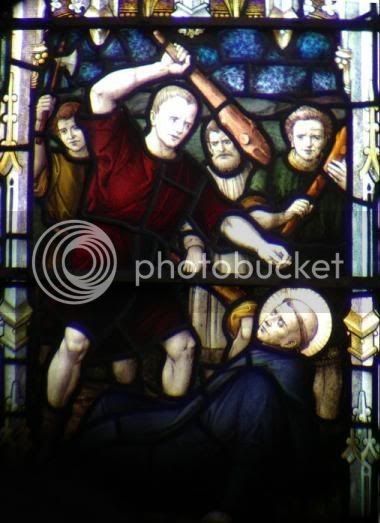 We have an image of this martyr's primary relic: 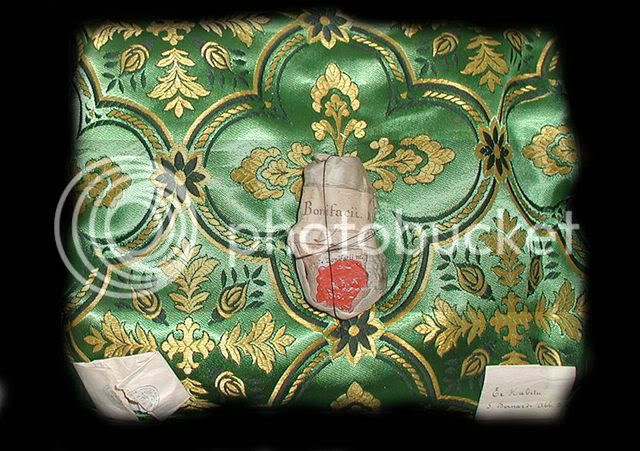 And his bishop's mitre: 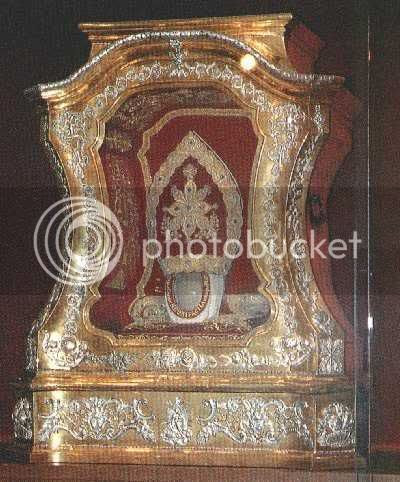 O God, who by the labours of blessed Boniface, thy Martyr and Bishop, didst vouchsafe to call many nations to the knowledge of thy Name : mercifully grant that we, who as on this day do keep his feast, may by his advocacy find favour in thy sight.
Amen.

Saint Boniface, please pray for us!

From The Liturgical Year, by Abbot Prosper Gueranger, OSB: O King of glory, Lord of hosts, who didst this day ascend in triumph above all the heavens! leave us not orphans, but send upon us the Spirit of truth, promised by the Father, alleluia. JESUS has ascended into heaven. His Divinity had never been absent; but, by the Ascension, His Hu­manity was also enthroned there, and crowned with the brightest diadem of glory. This is another phase of the mystery we are now solemnizing. Besides a triumph, the Ascension gave to the sacred Humanity a place on the very throne of the eternal Word, to whom it was united in unity of Person. From this throne, it is to receive the adoration of men add of angels. At the name of Jesus, Son of Man, and Son of God,--of Jesus who is seated at the right hand of the Father almighty,--' Every knee shall bend, in heaven, on earth and in hell.' 1 Give ear, O ye inhabitants of earth! This is the Man Jesus, who heretofore was a little Babe wrapped in swaddling clothes; who went through Judea and Galilee, not having where to lay His head; who was bound by the sacrilegious hands of his enemies, was scourged, crowned with thorns, nailed to a cross; who, whilst men thus trampled Him, as a worm, beneath their feet, submitted-His will to that of His Father, accepted the chalice of suffering, and, that He might make amends to the divine glory, shed His Blood for the redemption of you sinners. This Man Jesus, child of Adam through Mary the immaculate, is the master-piece of God's omnipotence. He is 'the most beautiful of the sons of men'; 2 the angels love to fix their gaze upon Him; 3 the blessed Trinity is well-pleased with Him; the gifts of grace bestowed on Him surpass all that men and angels together have ever received. But He came to suffer, and suffer for you; and though He might have redeemed you at a much lower price, yet would He generously overpay your debts by a superabundance of humiliation and suffering. What reward shall be given to Him? The apostle tells us in these words: 'He humbled Himself, becoming obedient unto death, even to the death of the cross; for which cause God also hath exalted Him, and hath given Him a name, which is above all names.' 4 You, then, who compassionate with Him in the suffering whereby He wrought your redemption; you who devoutly follow Him in the stages of His sacred Passion; now raise up your heads, and look up to the highest heaven! Behold this Jesus 'crowned with glory and honour because He suffered death'! 5 See how the Father has magnified Him in return for His having 'emptied Himself, taking the form of a ser­vant,' though in His other nature, He was equal with God. 6 His crown of thorns is replaced by a crown of precious stones. 7 The cross that was laid on His shoulders is now the ensign of His power. 8 The wounds made by the nails and the spear are now like five bright suns that light up all heaven. Glory, then, be to the justice of the Father, who has dealt thus with His Son! Let us rejoice at seeing the Man of sorrows 9 become now the King of glory; and let us, with all the transport of our souls, repeat the hosanna wherewith the angels welcomed Him into heaven. Nor must we suppose that the Son of Man now that He is seated on the throne of His Divinity, is inactive in His glorious rest. No; the sovereignty bestowed upon Him by the Father, is an active one. First of all, He is appointed Judge of the living and of the dead, 10 before whose judgement-seat we must all stand. 11 No sooner shall our soul have quitted the body, than she shall be presented before this tribunal, and receive from the lips of the Son of Man the sen­tence she will have deserved. O Jesus! by the glory Thou didst receive on the day of Thine Ascension, have mercy on us at that moment whereon depends eternity. But the judgeship of our Lord Jesus Christ is not to be confined to this silent exercise of His sovereign power. The angels, who appeared to the apostles after His Ascension, told us that He is to come again upon the earth; that He is to descend through the clouds, as He ascended; and that then shall be the last judgement, at which the whole human race is to be present! Throned on a cloud, and surrounded by the angelic host, the Son of Man will show Himself to mankind, and this time with all majesty. Men shall see Him whom they pierced; 12 the imprints of those wounds, which will give additional beauty to His sacred Body, will be an object of terror to the wicked, while to the good they will be a source of unspeakable consolation. The shepherd, seated on His ethereal throne, will separate the goats from the sheep. His voice, after so many ages of silence, will make itself once more heard upon this earth: He will speak to impenitent sinners, condemning them to eternal torments; He will speak to the just, calling them to approach Him, and ascend, body and soul, into the region of everlasting bliss. ... In the middle-ages, the Sunday within the octave of the Ascension was called the Sunday of roses, because it was the custom to strew the pavement of the churches with roses, as a homage to Christ who ascended to heaven when earth was in the season of flowers. How well the Christians of those times appreciated the harmony that God has set between the world of grace and that of nature!