Today is the feast of Saint Peter Ad Vincula. In Europe, it was celebrated as the first fruits of the harvest. "Lammas" probably comes from "Loaf Mass", and a ritual blessing of loaves of bread made from the first grain harvested was part of the Lammas rite. Harvest queens would be crowned in villages, and harvest suppers would be held. 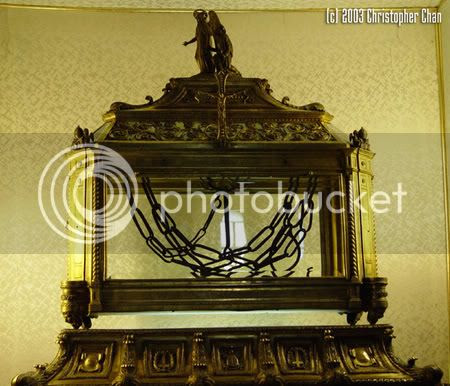 The Feast of Saint Peter's Chains was superimposed over the pre-Christian start of the harvest festivals (but with less success than with Christmas, Easter, and All Saints' Day). Though Lammas has lost much of its significance in the last hundred years, it has more cultural resonance than Saint Peter's Chains.

In Western Europe, the harvest is about 3 weeks earlier, on average, than in New England. We think of harvest time as September and October. But even in our own suburban gardens, aren't the first tomatoes ready about now? Raspberries and blackberries are a few days away. Sweet corn is about ready here. Apples will start ripening in a few weeks. Six weeks to fresh sweet cider!

While we are in agriculture mode, a rather rare thing for me, take a look at Mary Alexander's gardening tips.

Just because we are no longer an agricultural society does not mean that we need to lose touch with the traditional seasonal tempo of life.

This was also the beginning of the Autumn fair season. One still hears an Irish folk song called "The Oulde Lammas Faire."

In Flander's fields afar while resting from the War
We drank Bon Sante to the Flemish lassies O!
But the scene that haunts my memory is kissing Mary Ann
Her pouting lips all sticky from eating Yellow Man
As we passed the silver Margy and we strolled along the strand
From the ould Lammas Fair in Ballycastle-O!

For your edification in things edible and Irish, Dulse is a dried seaweed eaten as a vegetable, and Yellowman is a kind of toffee.

Think about it--there are 7 or 8 weeks to the Topsfield Fair and other fairs start before that. King Richard's Medieval Faire starts Labor Day weekend now. Many towns on the North Shore have their August festivals, probably the equivalent of the medieval fair near Lammas. Salem has its Heritage Days in August, a week-long festival of street fair, parade, and fireworks, along with ice cream "Scooper Bowls and Chowderfests. Beverly has Homecoming Week, and Newburyport has Yankee Homecoming this month.

Many towns in medieval and early modern Europe held large fairs on or near Lammas that brought people from far and near to the closest thing Europe then had to a mall. In medieval Europe, those fairs took on a much greater commercial significance than their descendants do today. The fairs were mobile, spending a few days in a given location (like a modern carnival).

The largest Lammas Fair that continues to this day is the Ould Lammas Fair in Ballycastle, Co. Antrim, Northern Ireland.

Lammas is the only resting point we have until the Feast of the Assumption in two weeks. It is our chance to assess how the summer is going, whether it will be an early autumn, or whether the heat will persist past Labor Day.

You don't need to be Haydn Pearson (The Countryman essayist in The New York Times 60 years ago) to notice that Autumn is on the way. Some sickly trees will start to change by the end of the month. In fact, one year I was shocked to see trees near the Prudential Center in Boston starting to turn yellow in mid July! Despite signs of the approach of fall, it may still be hot now and then, especially in early August. The "Dog Days," which began July 25th or so, may hold sway until the middle of the month. But the cooler days will start to be noticed more, especially after the fifteenth of August. By mid-month the growing shortness of the days will be evident.

With regard to the "Dog Days," a reader one year very helpfully sent this in for our edification (thank you very much!):

2) These Transitus days give us an extra bonus for feasting days of saints we love. St. Swithin's Feast is July 2, but "St. Swithin's Day" is July 15, his Transitus; and it is on the latter date that the weather depends. In France the weather saint is St. Medard (June 8), and the farmers know that "Quand it pleut a la saint-Medard, it pleut pour quarante jours plus tard."

In the USA, July 3 marks the beginning of Dog Days, and if it rains on this day, you'll have plenty of rain for the forty-day period of Dog Days. Plus the usual phenomena of dogs getting irritable and snakes biting more frequently, with especially powerful venom. My grandmother used to keep a dish filled with water in the yard for the dogs during Dog Days.

Autumn-themed decor started showing up in stores a few weeks ago. There were back-to-school displays (stacks of binders) in Walmart in June, a few days after school ended! And one weekend at the end of July, I saw in a TJ Maxx/HomeGoods store a startling array of fall, Halloween, and Thanksgiving decorative items. What, no Christmas decorations yet? Well, yes. Lemaxx Christmas Village displays are popping up already in AC Moore and Michaels.

Unfortunately, I and my fellow ragweed allergy sufferers will start to be miserable in about 10 days, and will stay that way until the first hard frost in October. It has not bothered me as much in Salem or in Boston. Not much ragweed nearby to trouble me. But when I am in the suburbs, or in more rural areas, gosh do my sinuses act up!

May the Lord bless this harvest and provide ample food for all His people. As a practical matter, your local food pantry does not want you to bake a loaf of bread for them. But today, as we celebrate the harvest, it would be great to write a $10.00 check to them, so they can buy bread for ten families for the week.

Since this is the day to celebrate first fruits of the wheat harvest, why not share a few recipes for bread? After all, grains are the staff of life, and are basic to our culture, indeed to all human survival. And the Bible is full of references to bread and its liturgical significance.

Our Lord decided upon bread as the form His Body would take for us.

The liturgical readings at Mass at this time of year focus on grain, wheat, bread, and the harvest.

And I must admit a terrific fondess for breads. Indeed, you might say that my body has never met a carbohydrate it did not take a serious liking to, and invite to stick around for life in a pleasant spot around my middle.

Directions
1.Place water, milk, vanilla extract, brown sugar, white sugar, cardamom, coriander, vegetable oil, and salt into the pan of a bread machine in that order. Pour the flour onto the other ingredients, and sprinkle the flour with yeast. Set the bread machine to the Dough cycle; turn on the machine.
2.Preheat oven to 350 degrees F (175 degrees C). Grease a 9x5-inch bread pan.
3.When the Dough cycle is completed, remove the dough from the machine, punch down if necessary, form into a loaf, and place into the prepared bread pan with the seam side down. Cover and let rise until doubled, 20 to 30 minutes.
4.Bake in the preheated oven until the loaf is golden brown, 35 to 45 minutes. Let cool in the pan for 5 minutes before removing to finish cooling on a rack.

In bread machine pan, place all ingredients in order suggested by manufacturer. Select basic bread setting. Choose crust color and loaf size if available. Bake according to bread machine directions (check dough after 5 minutes of mixing; add 1 to 2 tablespoons of water or flour if needed). Great for a roast beef sandwich. 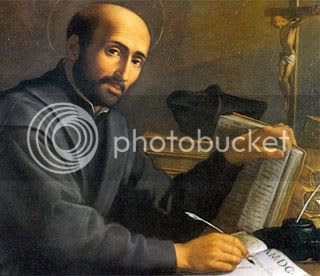 Founder of the Society of Jesus. Since I spent 7 years in a Jesuit school, though it was the very secular and very liberal Boston College, Saint Ignatius deserves a nod. He envisioned the Jesuits as much better than they have been in the last 50 years. And remember, the early Jesuits were the leaders in devotion to the Sacred Heart.

Of course, there is the old joke about two college students thinking about the priesthood, and examining orders they might join. One was reading about the Jesuits and the Dominicans.

He said to his companion, "What is there to pick from between these two orders? They were both founded by Spaniards in pre-modern times to fight heresy through education and preaching. The Dominicans were founded to fight Albigensianism, and the Jesuits to fight Protestantism."

"So," his companion asked, "What is the difference between them?".

"Well, off the top of my head, all I can come up with is to ask, 'When was the last time you saw an Albigensian walking the streets?'."

Now of course, the reigning Pope is a Jesuit.

Saint Ignatius of Loyola, please pray for us! 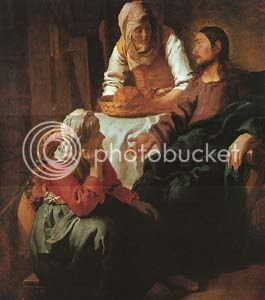 Martha was the sister of Mary of Bethany, and of Lazarus. She was the one who fussed over cooking for Jesus and His Apostles, while her sister Mary sat and listened to the Lord's discourse. She complained that Mary was doing "nothing" while she was doing all the work. But Our Lord explained that Mary had chosen "the better part," and that Martha ought to be less concerned with the minutiae of entertaining than with listening to His message.

She may have been a part of a mission to southern Gaul, where she may have died around 80 A.D.

Saint Martha Of Bethany, plese pray for us!