Message From the Holy Souls In Purgatory

I was checking to see if I, in all these years of blogging, had done a post on Saint Nicholas of Tolentino, who is a patron of the Holy Souls in Purgatory, and whose feast is today, September 10th. I never have. But I did mention him in this post for today's date in 2009. It will come as no surprise that I repeat posts. I think the message from this 7 year old post is important enough to repeat it.

Sometimes, subtle but important messages are delivered through unlikely sources. This morning, when I was going into church for my holy hour (and my Thursday holy hour is the shortest of the week, coming in at just an hour instead of the usual 1.5-2 hours because of an early Thursday schedule). I had just dipped my hand into the holy water fount and blessed myself, when an elderly chap on a Lark came over and said, "Remember, when you bless yourself to pray for the Holy Souls." It was sort of unusual, because I don't think I've said more than 10 words to the guy in 3 years. But I indicated that I thought that was a good idea, and left the narthex to head for my usual place near the Tabernacle.

First order of business once I got settled and set my crucifix up on the top of the back of the pew in front of me, since this was my short holy hour and I have to omit the Rosary and Divine Mercy Chaplet because of time considerations, was to open my 1959 Saint Joseph Daily Missal to the readings for the Extraordinary Form for the day. Today is the feast of Saint Nicholas of Tolentino, and almost the only information contained about him was that he was particularly devoted to the Holy Souls.

So the Holy Souls were double-teaming me with prayer requests this morning. Why me? Maybe because I try to pay attention to little messages like that. Maybe because they know that this blog contains a lot of information on the Holy Souls and their needs every Hallowmas.

Why now? Six weeks from now, this blog usually goes all out for them anyway. Maybe because the Holy Souls in Purgatory are in desperate need for prayers, Masses, fasting, almsgiving, and Rosaries to alleviate their suffering and speed their purgation. Now and always, not just in the novena period before and octave after All Souls.

So allow me to anticipate my usual late-fall focus on the Holy Souls, and ask you now to pray for them. Offer prayers, Rosaries, Masses, fasts, almsgiving, and other good works for them. They are in need all the time, not just in late October and early November. Those poor souls are indeed suffering the very same torments as the damned suffer, namely purging fire, but with the difference that they know that someday, they will be released from their tortures, and will be among the Blessed in Heaven, where the damned are damned for all eternity, and there will never be an end to their torments.

Suffering purging fire is no pleasant thing. I once embraced the concept of Purgatory as waiting room, where souls waited patiently 10, 20, 50, or 100 years for "their turn." No real suffering, but lots of boredom. As someone who has spent an awful lot of his life waiting for this or that, I could understand that.

But my reading has convinced me that Purgatory is not just a giant waiting room. It is essentially the same as Hell. With all that Hell implies. So that explains the urgency one feels in requests for prayers for those Holy But Poor Souls there.

Who is there? The ranks of the souls in Purgatory could contain a huge percentage of people we ourselves have known who have died in the last hundred years. Parents, siblings, aunts, uncles, cousins, grandparents, neighbors, friends, classmates, teachers, professors, shopkeepers, writers, thinkers, singers, performers, actors, politicians, journalists, doctors, ball players.

Think of that. Your mom, your brother, your fourth grade teacher, your favorite professor, the guy who ran the convenience store you got a comic book at every Sunday, the old lady down the street who always baked cookies for you, or gave you an especially big bag of treats at Halloween, the guy who owned the gas station you always filled your first car up at, the journalist or pundit who changed your views about this or that, the politician you admired most, your pediatrician, your high school sweetheart, your favorite baseball player of your youth, or the singer who you liked best growing up could be suffering unspeakable torments now, even 50 years after they died.

And you are reluctant to offer Saint Gertrude's Prayer, said to release a thousand souls to Heaven every time it is said, to skip a meal and offer it for the Holy Souls, to give an extra $10 to the Poor Box at church, to offer your Rosary or the Mass you hear, for people who once were an integral part of your life?

Are we that ungrateful?

If we are, maybe self-interest will prompt us to greater charity.

If you are very lucky, and are not damned to Hell for all eternity yourself, you will be among the Suffering Souls in Purgatory. Let's face it. You are not holy enough to draw a "Go Directly To Heaven Card." Even the most pious old church lady you know is probably going to spend 50 years or more in Purgatory.

And when you are there, you will then be, as they are now, in desperate need of prayers, Masses, Rosaries, almsgiving, fasts, and good works. And you will be very grateful if someone on earth prays for your rapid salvation and purgation. Because once you are there, only the prayers of those on earth can speed your purgation and end your sufferings and get you to Heaven faster. The Holy Souls are called the Poor Souls because they can't do anything for themselves any more. Only the living can help them, and only those living after we die can help us through Purgatory with prayers.

So do everything to foster a renewal of the cult of praying for the Souls in Purgatory, because it works to your own self interest. It is like "pay\ing it forward."

With the decline in belief and practice, fewer people are praying for those souls today compared to 100 years ago. Even family members now think everything is hunky-dory with the dead, and they go straight to heaven, and are swiftly forgotten. Fewer people praying for the souls in Purgatory means they end up staying there longer. Suffering more and longer.

But if we pray for them they suffer for a shorter time, and see the face of God faster. And if we foster the practice of praying for the dead, we will benefit from those prayers of those who come after us.

Memento Mori and pray for the Holy Souls in Purgatory.

Prayer of Saint Gertrude For the Holy Souls

Eternal Father, I offer Thee the Most Precious Blood of Thy Divine Son, Jesus, in union with the Masses said throughout the world today, for all the holy souls in Purgatory, for sinners everywhere, for sinners in the universal Church, those in my own home, and within my family. Amen. 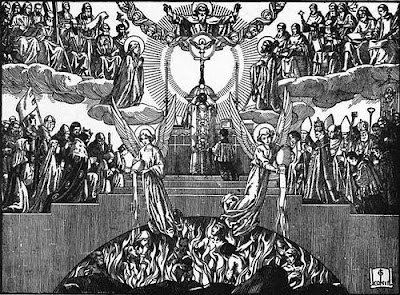 Nativity Of Our Blessed Lady 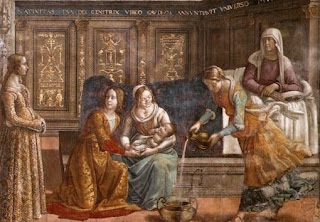 I saw her in person once many years ago as she was walking through Logan Airport surrounded by people. I am not sure if that was in 1982 or 1985. My family was at the airport to see off the daughter of a dear friend who was moving to Sweden. We were not expecting anything unusual. I think we knew vaguely that she was coming into town, but had no idea that she might arrive at the same terminal at about the same time. These were the days when you could see people off at the gate itself, or meet arrivals at the gate itself. Rumor spread through the crowd that Mother Teresa had just arrived at the same terminal. Then a little bit later a crowd walking with reporters passed not 20 feet away, and we could see Mother Teresa right in the middle!

She can't be liturgically celebrated by those of us devoted to the 1962 Ordo, as, obviously, she wasn't canonized until a few hours ago, until there is some judicious reform of the 1962 Ordo. Her feast day in the Ordinary Form will be September 5th, the anniversary of her death in 1997.

Saint Mother Teresa of Calcutta, please pray for us!