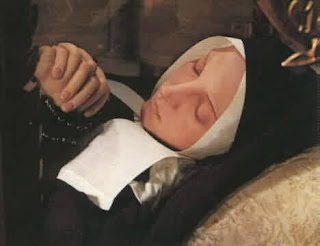 Wikipedia on her life.

Saint Bernadette, please pray for us! 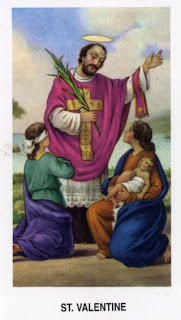 Today is the feast of Saints Valentine. There appear to be more than one.

Fisheaters has the details.

Saints Valentine, please pray for us!

The Mystery of Septuagesima
from Abbott Prosper Gueranger, The Liturgical Year

The season upon which we are now entering is expressive of several profound mysteries. But these mysteries belong not only to the three weeks which are prearatory to Lent: they continue throughout the whole period of time which separates us from the great feast of Easter.

The number seven is the basis of all these mysteries. We have already seen how the holy Church came to introduce the season of Septuagesima into her calendar. Let us now meditate on the doctrine hidden under the symbols of her liturgy. And first, let us listen to St. Augustine, who thus gives is the clue to the whole of our season's mysteries. 'There are two times,' says the holy Doctor: 'one which is now, and is spent in the temptations and tribulations of this life; the other which shall by then, and shall be spent in eternal security and joy. In figure of these, we celebrate two periods: the time before Easter, and the time after Easter. That which is before Easter signifies the sorrow of this present life; that which is after Easter, the blessedness of our future state... Hence it is that we spend the first in fasting and prayer; and in the second we give up our fasting, and give ourselves to praise.'

The Church, the intepreter of the sacred Scriptures, often speaks to us of two places, which correspond with these two times of St. Augustine. These two places are Babylon and Jerusalem. Babylon is the image of this world of sin, in the midst whereof the Christian has to spend his years of probation; Jerusalem is the heavenly country, where he is to repose after all his trials. The people of Israel, whose whole history is but one great type of the human race, was banished from Jerusalem and kept in bondage in Babylon.

Now, this captivity, which kept the Israelites exiles from Sion, lasted seventy years; and it is to express this mystery, as Alcuin, Amalarius, Ivo of Chartres, and all the great liturgists tell us, that the Church fixed the number of seventy for the days of expiation. It is true, there are but sixty-three days between Septuagesima and Easter; but the Church, according to the style so continually used in the sacred Scriptures, uses the round number instead of the literal and precise one.

The duration of the world itself, according to the ancient Christian tradition, is divided into seven ages. The human race must pass through the seven ages before the dawning of the day of eternal life. The first age included the time from the creation of Adam to Noah; the second begins with Noah and the renovation of the earth by the deluge, and ends with this the vocation of Abraham; the third opens with this first formation of God's chosen people, and continues as far as Moses, through whom God gave the Law; the fourth consists of the period between Moses and David, in whom the house of Juda received the kingly power; the fifth is formed of the years which passed between David's reign and the captivity of Babylon, inclusively; the sixth dates from the return of the Jews to Jerusalem, and takes us on as far as the birth of our Saviour. Then, finally, comes the seventh age; it starts with the rising of this merciful Redeemer, the Sun of justice, and is to continue till the dread coming of the Judge of the livng and the dead. These are the seven great divisions of time; after which, eternity.

In order to console us in the midst of the combats, which so thickly beset our path, the Church, like a beacon shining amidst the darkness of this our earthly abode, shows us another seven, which is to succeed the one we are now preparing to pass through. After the Septuagesima of mourning, we shall have the bright Easter with its seven weeks of gladness, foreshadowing the happiness and bliss of heaven. After having fasted with our Jesus, and suffered with Him, the day will come when we shall rise together with Him, and our hearts shall follow Him to the hightest heavesn; and then after a brief interval, we shall feel the Holy Ghost descending upon us, with His seven Gifts. The celebration of all these wondrous joys will take us seven weeks, as the great liturgists observe in their interpretation of the rites of the Church. The seven joyous weeks from Easter to Pentecost will not be too long for the future glad mysteries, which, after all, will be but figures of a still gladder future, the future of eternity.

Having heard these sweet whisperings of hope, let us now bravely face the realities brought before us by our dear mother the Church. We are sojourners upon this earth; we are exiles and captives in Babylon, that city which plots our ruin. If we love our country, if we long to return to it, we must be proof against the lying allurements of this strange land, and refuse the cup she proffers us, and with which she maddens so many of our fellow captives. She invites us to join in her feasts and her songs; but we must unstring our harps, and hang them on the willows that grow on her river's bank, till the signal be given for our return to Jerusalem. She will ask us to sing to her the melodies of our dear Sion: but how shall we, who are so far from home, have heart to 'sing the song of the Lord in a strange land'? No, there must be no sign that we are content to be in bondage, or we shall deserve to be slaves forever.

These are the sentiments wherewith the Church would inspire us during the penitential season which we are now beginning. She wishes us to reflect on the dangers that beset us; dangers which arise from ourselves and from creatures. During the rest of the year she loves to hear us chant the song of heavne, the sweet Alleluia; but now, she bids us close our lips to this word of joy, because we are in Babylon. We are pilgrims absent from our Lord, let us keep our glad hymn for the day of His return. We are sinners, and have but too often held fellowship with the world of God's enemies; let us become purified by repentance, for it is written that 'praise is unseemly in the mouth of a sinner.'

The leading feature, then, of Septuagesima, is the total suspension of the Alleluia, which is not to again be heard upon the earth until the arrival of that happy day, when having suffered death with our Jesus, and having been buried together with Him, we shall rise again with Him to a new life.

The sweet hymn of the angels, Gloria in excelsis Deo, which we have sung every Sunday since the birth of our Saviour in Bethlehem, is also taken from us; it is only on the feasts of the saints which may by kept during the week that we shall be allowed to repeat it. The night Office of the Sunday is to lose also, from now till Easter, its magnificent Ambrosian hymn, the Te Deum; and at the end of the holy Sacrifice, the deacon will no longer dismiss the faithful with his solemn Ite, Missa est, but will simply invite them to continue their prayers in silence, and bless the Lord, the God of mercy, who bears with us, notwithstanding all our sins.

After the Gradual of the Mass, instead of the thrice repeated Alleluia, which prepared our hearts to listen to the voice of God in the holy Gospel, we hsall hear but a mournful and protracted chant, called, on that account, the Tract.

That the eye, too, may teach us that the season we are entering on is one of mourning, the Church will vest her ministers (both on Sundays and on the days during the week which are not feasts of Saints) in the sombre purple. Until Ash Wednesday, however, she permits the deacon to wear his dalmatic, and the subdeacon his tunic; but from that day forward, they must lay aside these vestments of joy, for Lent will then have begun and our holy mother will inspire us with the deep spirit of penance, but suppressing everything of that glad pomp, which she loves at other seasons, to bring into the sanctuary of her God.